I’ve made a mystery box for my girlfriend’s birthday present, powered by Arduino, two servos, a handful of phototransistors and a bunch of LEDs. (Source code link near the bottom.)

My girlfriend and I have been playing Myst a lot lately.

These games are old, but real classics. You’re the “stranger,” visiting different worlds (called “ages”) that are full of intricate mechanical and logical puzzles for you to solve. There’s no time pressure; no way to actually lose except by giving up. It’s hard not to get lost in the story that’s unfolding around you, or in the breathtaking environments where it all takes place.

Anyway. My girlfriend’s birthday was coming up, as it is prone to at this time of the year. I needed a present. And then, I needed a delivery mechanism for the present.

And since the present turned out to be representable by a rather smallish token, I thought I could conceivably build some kind of Arduino-powered device around it.

And that’s where Myst comes in.

Myst puzzles often work like this: You’ve got a device in front of you and no idea how to use it. If you’re lucky, there are some clues in one of the various papers or personal diaries you’ve found earlier. The device invariably includes at least one button or lever of sorts, and usually something moves or lights up when you do something right (or wrong).

So I built something like that over the past two weeks. Here it is: 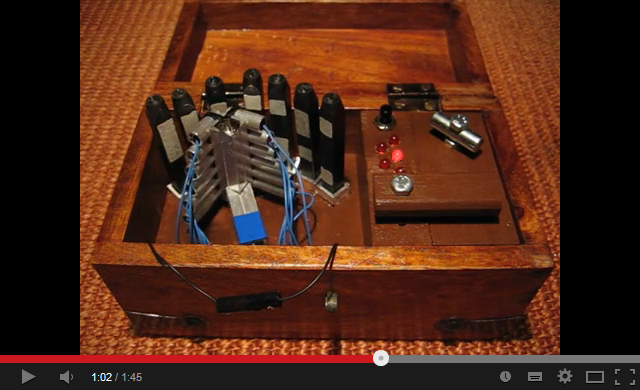 (I didn’t make the wooden box, of course. Just its innards.)

Putting this all together was a lot of fun – mingled, of course, with the requisite brief moments of frustration, exasperation, exhaustion, occasional feelings of being overwhelmed by the sheer amount of little things to think about, and the few exclamations of “WTF” that seem to be part of any such project.